The famous British group The Prodigy and exclusive AAA Production and proud to represent the "Warrior's Dance Festival" (WDF), which is scheduled for Saturday, September 15, 2012. Starting at 17.00 hrs. The festival will be held in Belgrade, Kalemegdan fortress.

Following the great success of the first festival held in Tokyo, the 2009th and the excellent response to last year's spectacle in Milton Keynes Bowl in London, the band The Prodigy has decided to transfer this experience to people in Serbia and the region. Feeling that here have their strong support, especially after that memorable concert in 1995. and 2005. was held in Belgrade, as well as at the Exit festival in Novi Sad (2007. and 2009.), who these days is recorded record of the visit, members of the band's eagerly awaited return visit to Serbia, and with a completely new conceptual event!

There is no doubt that the world music scene in the period since 2009. by 2011. The group belonged to The Prodigy. Their album "Invaders Must Die" is reached in the first place music charts, sold over 1.3 million copies worldwide, making it the most successful European independent album in 2009.. Famous for its stimulating and amazing concert performances, the group went around the world crossed the 300,000 kilometers of pipe in order for 2 million people to 128 concerts in 37 countries.
Currently in the studio where they recorded sixth album which is planned for publication during the 2012th year.

"Warrior's Dance Festival Belgrade" was devised by members of The Prodigy and present the best program of today's music scene, based on a daring creation and the idea that favors fast, hard beats and guitars. The festival promises to provide a wide range of entertainment and concerts on the main and two more stages is called Take Me To The Hospital and Invaders Must Die. The concert will be a special guest from Serbia and abroad, and on the festival site will be set and various art installations, inspired by futuristic industrial theme, with of course a powerful central performance by The Prodigy, which will be exclusively for this occasion to present our audience of the latest materials announced for 2012..

The first edition of Warrior's Dance Festival in Belgrade, the next band, The Prodigy, which this will be one of the exclusive concerts this year, as a special guest to perform the leader of a new generation of extreme electronic music, the revolutionary and progressive Skrillex. Strong domestic support will provide crossover dub reaggae Eyesburn returnees, and the punks of all time - rhythm disorder and Jet. Program and the pursuit of the festival is to highlight new trends, and so will your music at the festival to introduce and electro-pop punk heroine Lollobrigida, psychedelic electro rock sensation Diesel, as well as groups whose time is yet to come - industrial pioneers Dreddup, and alternative rock band Hype , whose debut album is eagerly awaiting.

The program will soon be complemented with another artist whose music fits the basic concept of the festival - hard rhythms and guitars, and the organizers have announced a series of actions that will be interesting to monitor the maintenance of this unique and long-awaited festival in Belgrade. 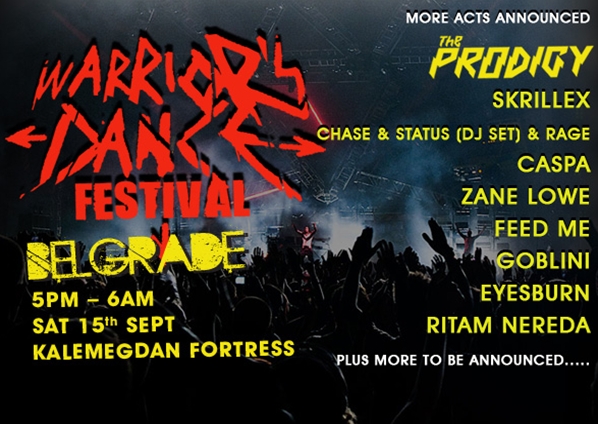